I turned *way too old* earlier this month. Hence, on my birthday month, I would like to record the donation I made to Effective Altruism: 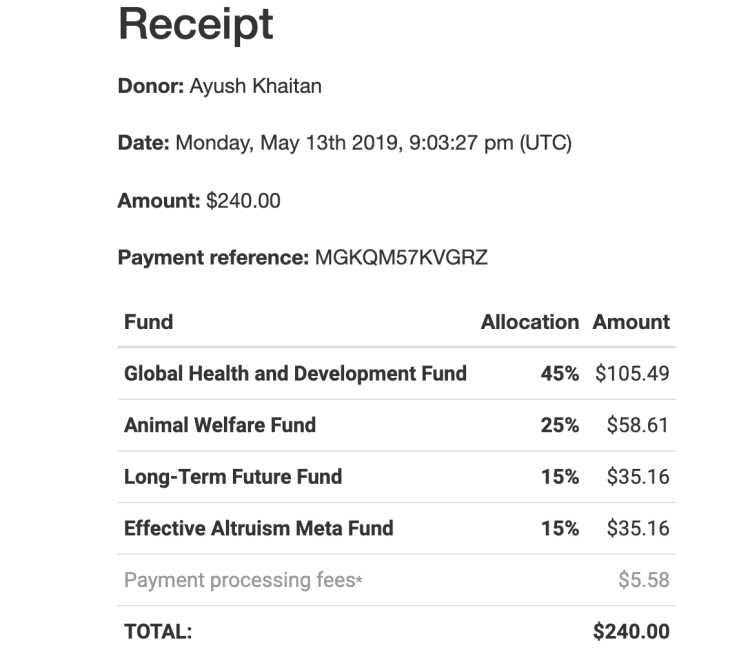 I have also started reading on poverty in India. The first paper that I perused (very) partially is this.

It is a paper written by two Indian PhD students at Columbia University, who talk about the fact that there are basically two poverty lines used by the government of India. The latest one is in fact a harsher scale of poverty, and according to both such lines poverty in India has been steadily decreasing, especially in the 2004-2005 and the 2009-2010 period. The authors do not use the 5-year studies on poverty as a basis for their conclusions, but the annual expenditure survey done by the government of India. The basis for their choice is the following: people who spend more are probably earning more, and vice-versa. Hence, whether people are above or below the poverty line can be easily approximated by how much they’re spending.

I didn’t complete reading the paper for the following reasons: it seems motivated at the very outset to show that India is “shining”, it is more an instance of statistical jugglery than a commentary on the causes of poverty, and bases its conclusions on poverty lines that I don’t take to be credible. Every government is motivated to suppress data on poverty, or introduce measures of poverty that suggests that there are less poor people in their country than there really are. And I find the two poverty lines to not be a good measure for poverty in India.

I then found this book written up by people at the World Bank.